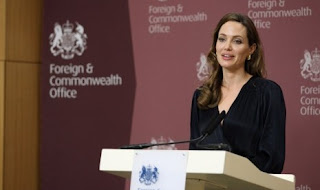 Suspected chemical weapons attacks that killed 1,300 people in Syria gets the attention of the world. Including from Hollywood actress, Angelina Jolie.
As UN ambassador, Jolie released a statement that called the situation in Syria heartbreaking.

"What happens to the kids Syria painful. Thousands of innocent young children and women have lost their lives in a terrible state, including the recent attacks near Damascus," said Jolie told Arab News on Monday (26/8).

According to him, there are currently one million Syrian children who survive as refugees in heartbreaking conditions.

"Children are vulnerable in need of housing, food, and assistance. But, above all, they need security," he said.

He added that the international community should not turn away from Syria. "They have to find new ways to seek peace with urgency and determination," said Jolie.

Jolie traveled to Jordan in June where he met with Syrian refugees who fled the conflict country.

At that time, he gave a special message.

"I appeal to the leaders of the world, please put aside your differences, come together to end the violence, and make diplomacy succeed," he said.